As we reflect upon 2013, we look back on a year of memorable events in the Stowe area.  Highlights include the completion of Stowe’s brand new ice arena, Stowe and Waterbury celebrating their 250th birthdays, and Morristown breaking ground on the new Rt. 100 by-pass.

The steady real estate market of 2013 in our area was highlighted by consumer confidence, leading to an increase in the number of sales.  Buyer demand continued to help strengthen overall sales despite interest rates edging a bit higher throughout the course of the year, due to the improving economy.  The mortgage rates are still extremely favorable, currently hovering around 4.5% for a 30 year with 0 points. A decrease in inventory is a trend we are watching which could ultimately cause an uptick in pricing, particularly if buyer demand continues.  The general real estate recovery was also bolstered by the positive returns of U.S. stocks for the fifth straight calendar year, which for the S&P 500 Index was 32.39%.

Year over year we continue to see markings of a continued gradual recovery building on that of 2012.  Below you will see the steady increase of real estate sales in Stowe.  Among residential, condominium and land sales, residential increased the most, which was 11% higher from the previous year.  The number of residential sales for 2013 is virtually a 75% increase from the low of 2009.  Condominium sales rose 33%; and land sales 5%.

Click on any of the charts below to view full screen. 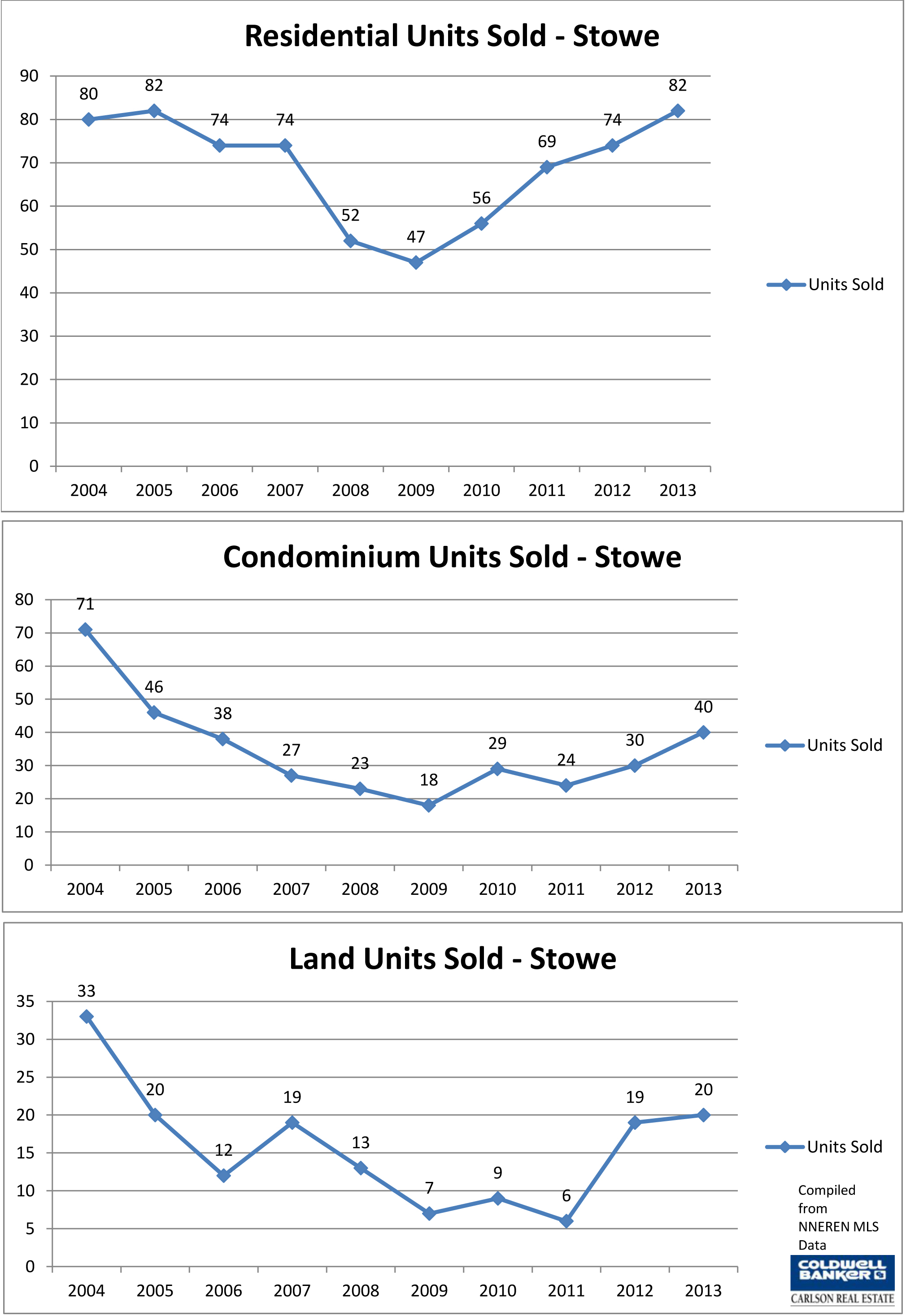 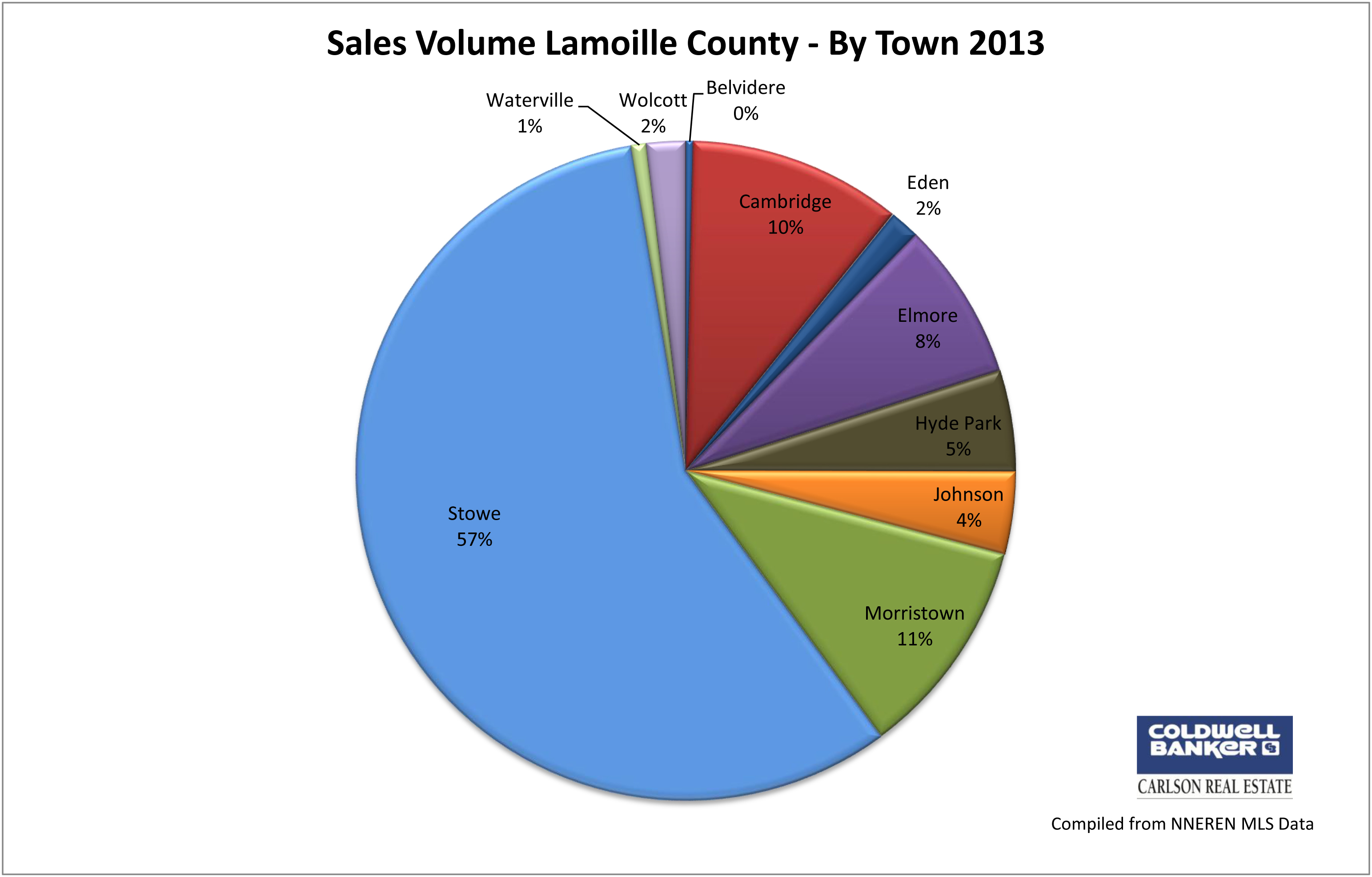 The decrease in inventory was seen mostly in the condominium listing category which saw a drop of 23%.   The amount of inventory for home and land listings decreased by 12% and 15% respectively. The median sales price for Stowe homes dropped 4%, whereas the average increased 3%.  For condominiums, the median and average increased 5% and 10% respectively.  Land sales showed the most significant decreases whereby the median dropped 48%, and the average, 58%, keeping in mind that this is out of a total of 20 sales.  The national median existing-home price for all housing types was $196,300 in November, up 9.4 percent from November 2012. 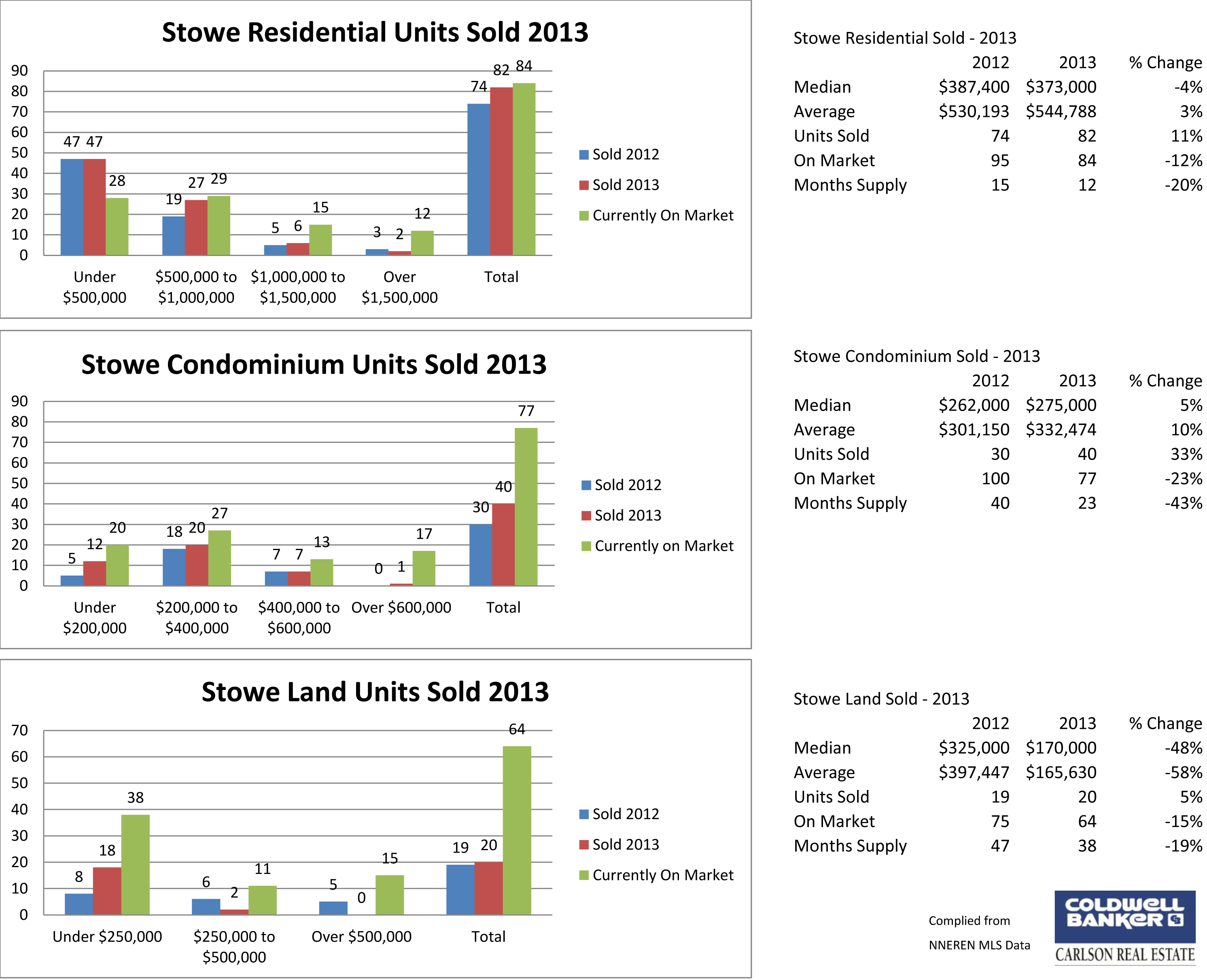 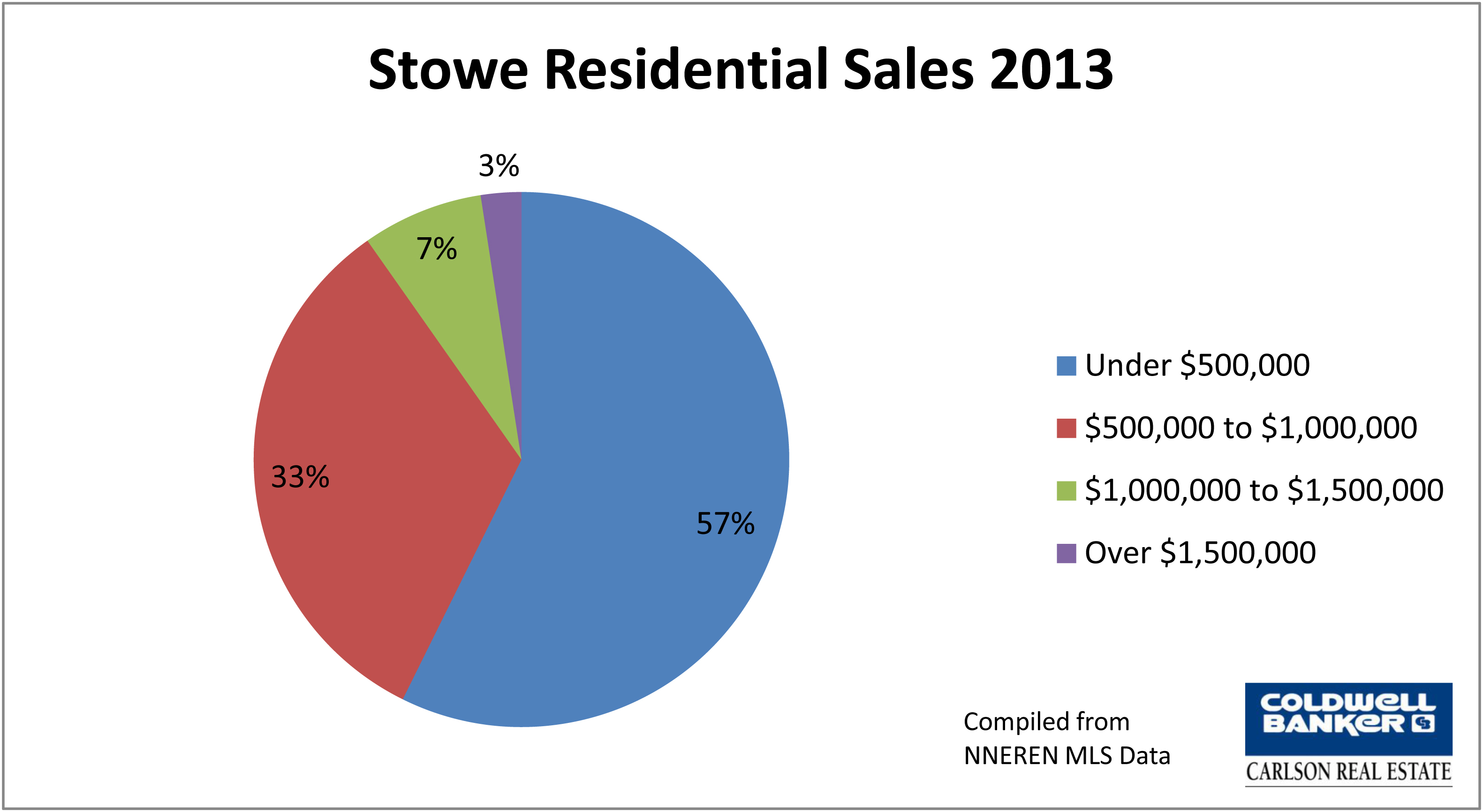 When comparing the 4th quarter alone to that of the 3rd quarter, the overall data shows the volume of sales actually slipped in all three categories.  This mirrored many of the national reports. 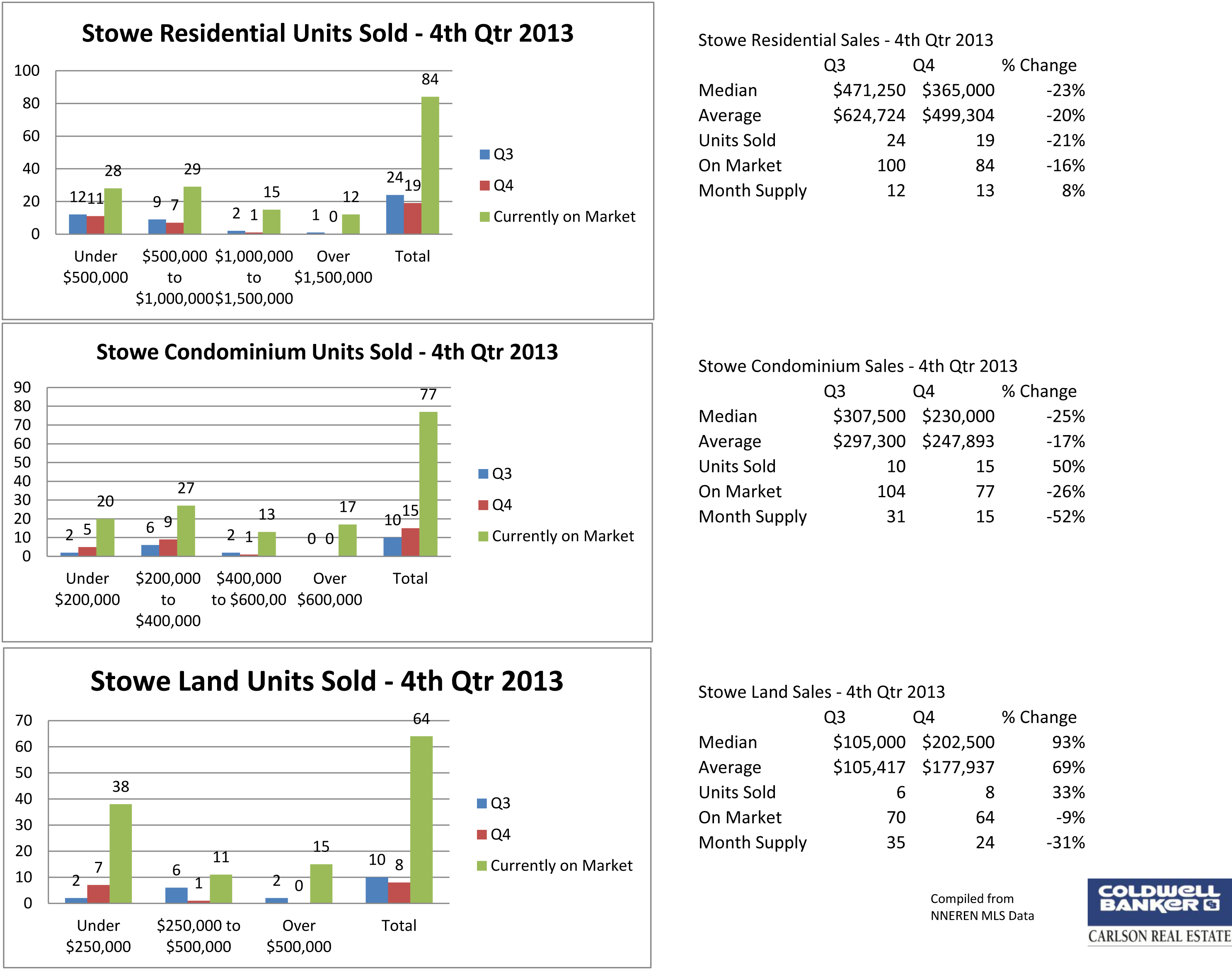 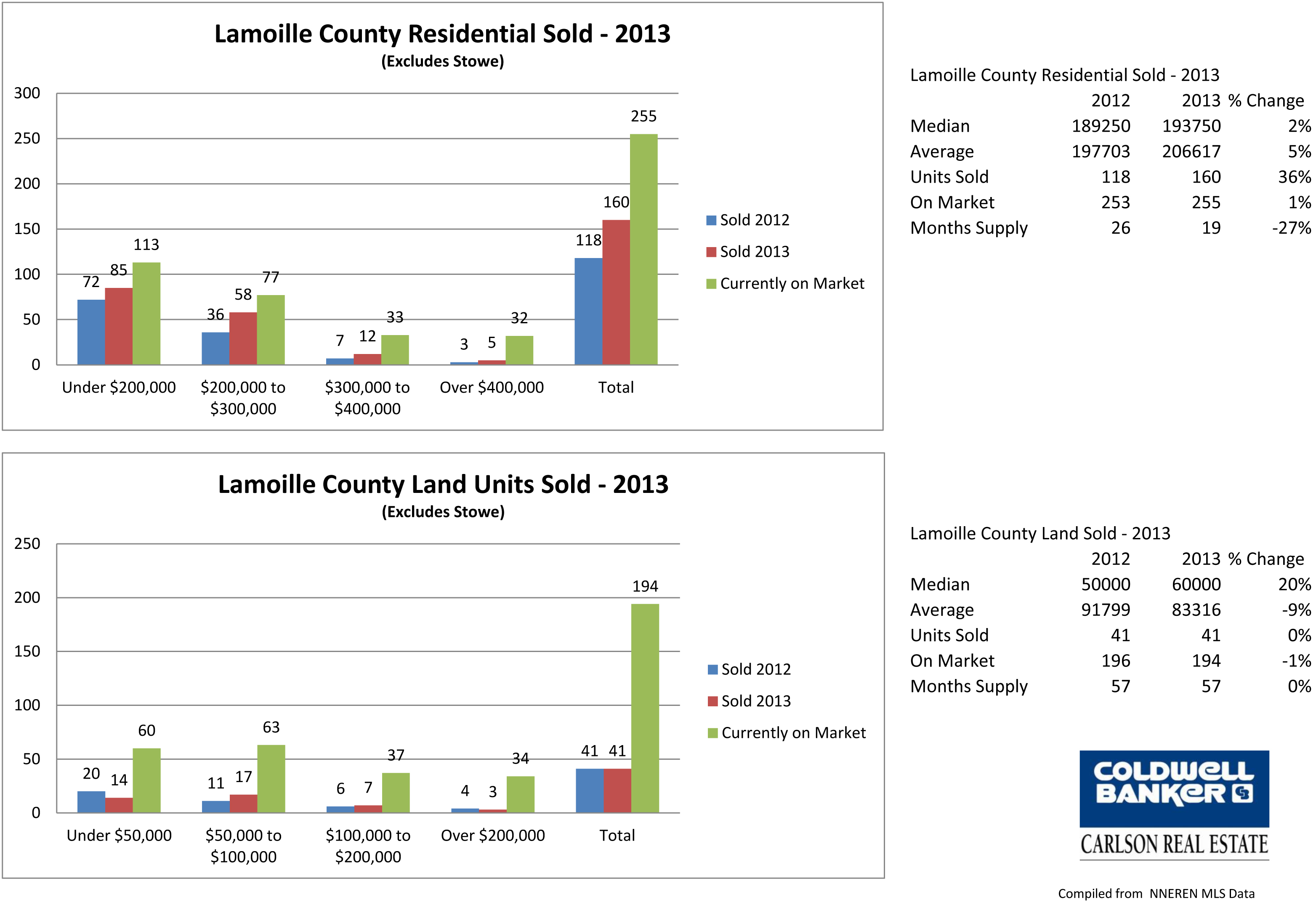 Looking at the sales data for all of the other towns in Lamoille County, excluding Stowe, the remaining 43% of the sales encompass 8 other towns in the County.  The majority of those sales (11%) took place in Morristown, with the second highest in Cambridge, which is closer to Burlington than any of the other towns.  The amount of inventory was actually up 1%, as compared to the 12% drop in Stowe.

Waterbury residential sales also increased nicely, at a rate of 9% from the previous year.  But the median price slipped 16%, and the average, 13%.  Although Waterbury has the least amount of Inventory than Stowe and the other towns in Lamoille County, supply increased 6%, from 32 residential listings to 34.  There was no change in the number of month’s supply.

As for land sales there, the number of closings fell 29%, but that was for only a total of 5 sales.  The inventory for land listings increased by 15%.  The median sales price dropped 32%, while the average went up 62%. 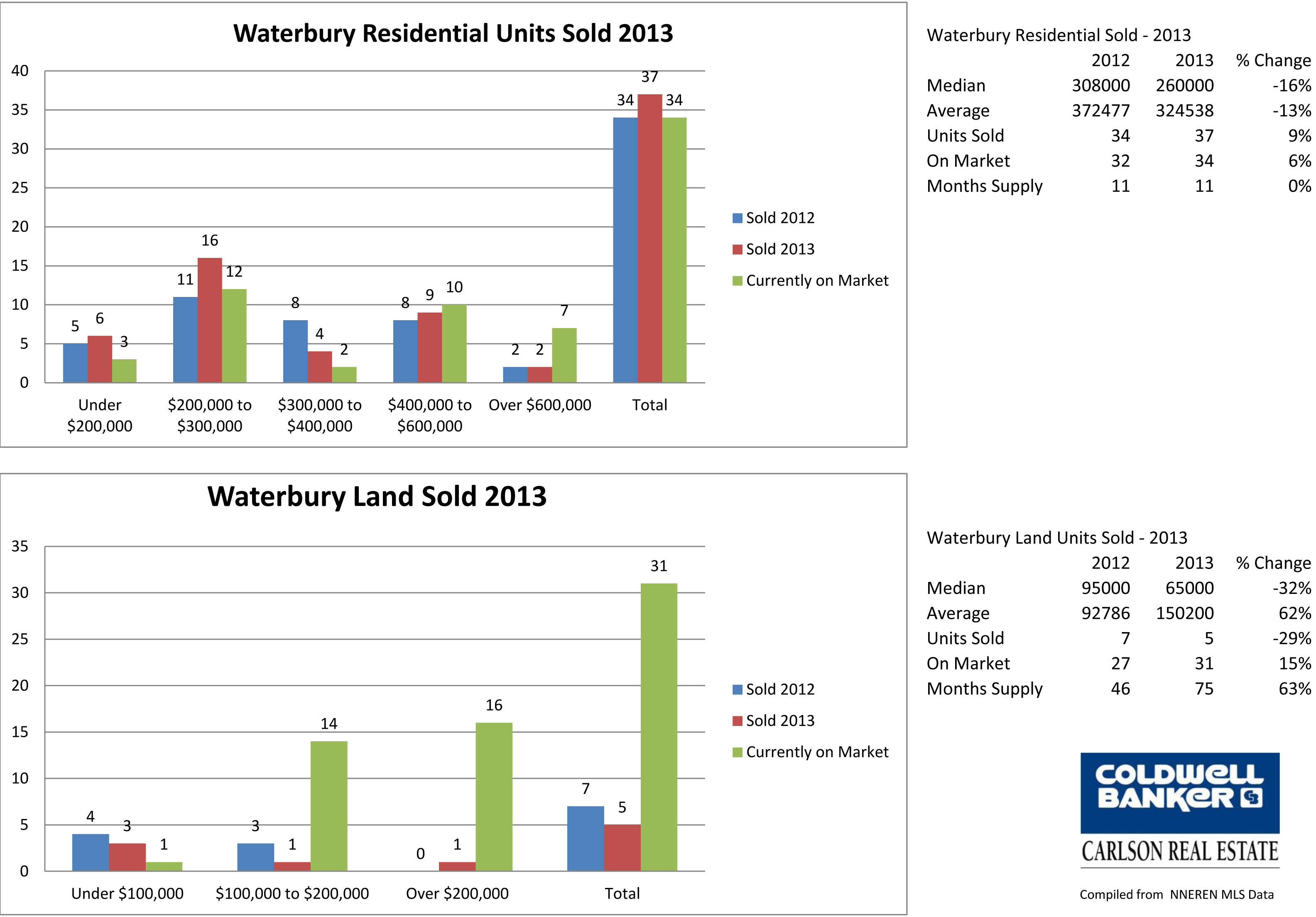 On a statewide level, the Coldwell Banker brand is again, the leader in sales in the state.  We are proud to recognize our neighboring affiliates as we work together to achieve the highest standards of practice and professionalism that we have been awarded year after year. 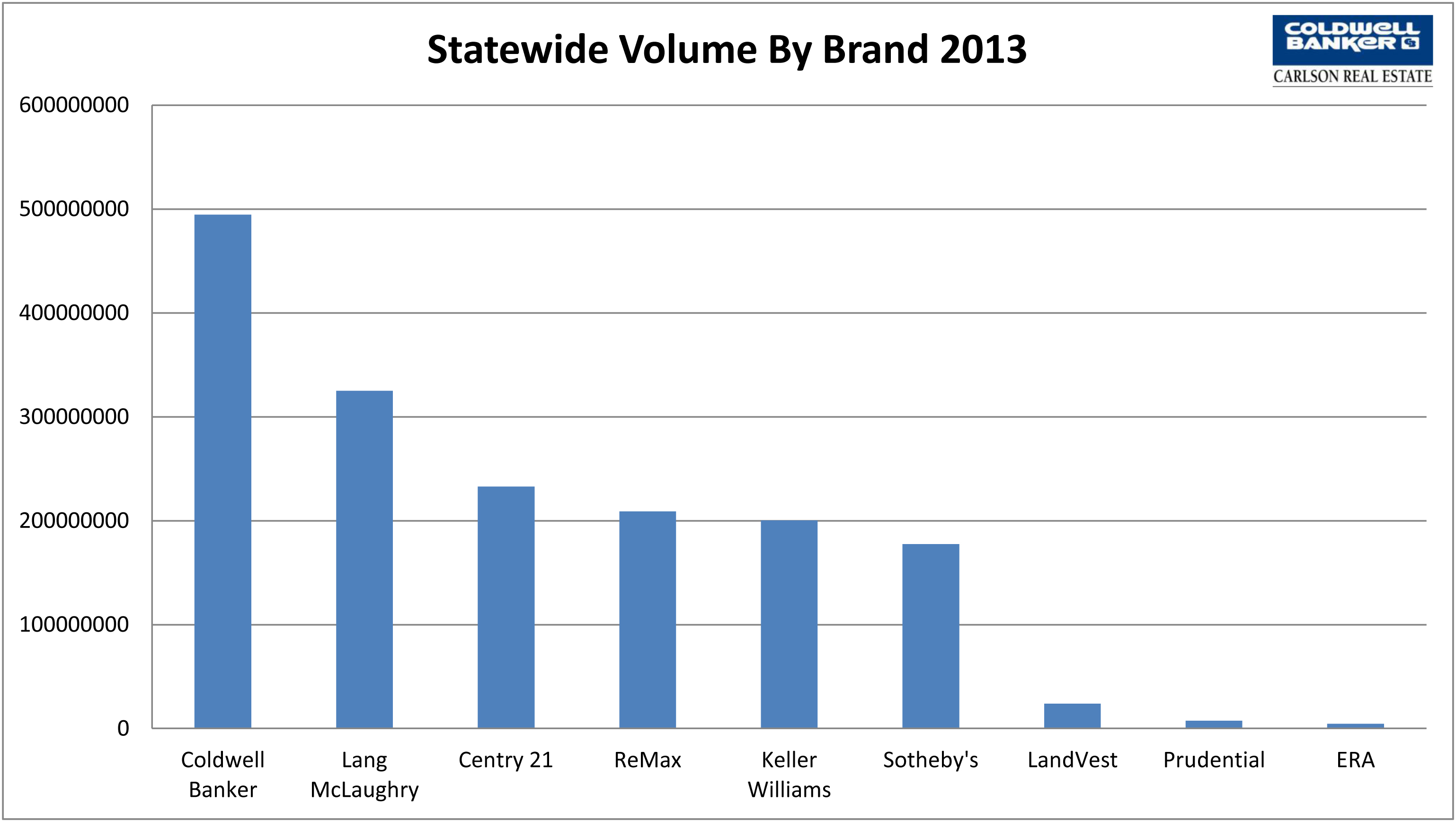 We look forward to another busy year of assisting our buyers and sellers with marketing, purchasing and sales; and based on the activity we are already seeing this January, we are confident that the market will continue to show signs of improvement, strength, and an overall increase in sales.

If you have any questions about this report, or would like any additional information or statistics, please feel free to contact me at anytime.